Re-usable and biodegradable underwear that performs the functions of tampons and panty liners (so-called period pants) has been developed by a researcher working with viscose fibres at Hof University of Applied Sciences. 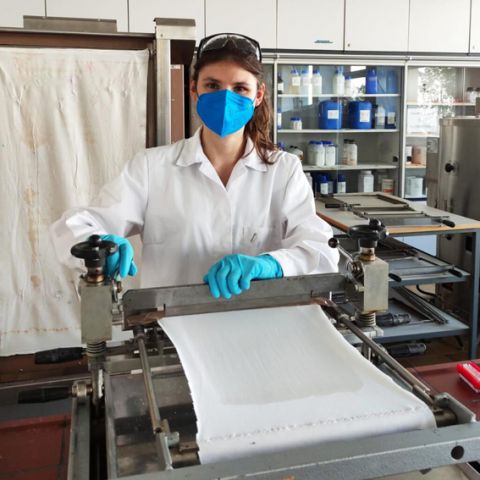 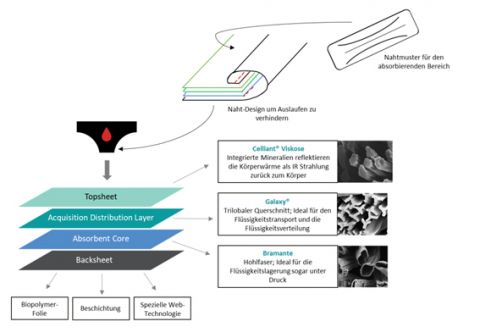 Diagram showing the structure of the period pants.

Former master’s student at the German University, Natalie Wunder (who is now Project Leader for New Business Development at Kelheim Fibres), says that – unlike conventional period pants – her invention combines sustainability, performance and comfort. It comprises four layers, the first three of which are made from viscose fibres supplied by Kelheim Fibres:

The top sheet is manufactured using Celliant Viscose fibres, embedded in which are minerals that convert body heat into infra-red (IR) radiation. Kelheim Fibres, of Kelhiem, Germany, claims that, when worn close to the skin, the IR radiation from Celliant Viscose is absorbed by the wearer's body tissue, boosting oxygen levels, improving athletic performance and quality of sleep, and reducing recovery times, as well as promoting general health and wellness(1).

The ADL is made from Galaxy, a trilobal fibre that absorbs 25–30% more fluid than cotton or standard viscose fibres(2).

The core is made from Bramante, a viscose fibre with a hollow cross-section where it stores fluid. Kelheim Fibres says that Bramante not only delivers an excellent absorption capacity, but also a moisture-retention level of 250%—in contrast to 80% in standard viscose fibres. The liquid remains inside the fibre, even under pressure. As a result, the wearer feels comfortable, dry and safe(3).

These layers, together with the back sheet, are held together using a seam specially designed to help prevent leakage.

Director of New Business at Kelheim Fibres, Marina Crnoja-Cosic, says: “Our biodegradable hygiene fibres have long been the basis for convenient disposables; the fact that they now also combine sustainability and performance in re-usable products is a big step for us."

Kelheim Fibres is currently working to develop a supply chain so that the pants can be commercialised and is working to apply the concept to incontinence products.

The pants took third place at the Cellulose Fibre Innovation of the Year Award, which was presented at the International Conference on Cellulose Fibres 2022 held in Cologne, Germany, on 2–3 February.

Lanxess to add sustainable alternatives to range of reinforced thermoplastics

Andritz updates pilot line for the production of plastic-free wipes