FREE CONTENT: Embedded sensors for monitoring the manufacture of composites

A method for incorporating sensors into carbon-fibre reinforcement fabrics so that they can collect data about the processes used to make composite parts from them has been developed by researchers at the University of Sheffield Advanced Manufacturing Research Centre (AMRC) in the UK. 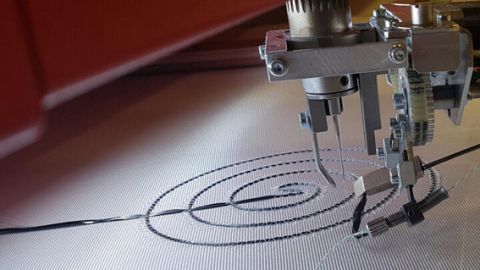 Using a tailored fibre placement system, the researchers were able to position fibre-optics within a preform in specific locations and shapes, which would be a requirement for the monitoring of complex components.

By embedding sensors inside the reinforcement, data can be gathered on such as the infusion, cure and machining processes that composite parts are subjected to as they are made. Such data could prove useful in the diagnosis of production issues that might cause the performance of the parts to degrade, or the parts to fail entirely, when in use.

The biggest challenge faced by the AMRC team was to find a way that would enable them to insert the sensors at the same time as the carbon-fibre reinforcement is made, while ensuring that their function and integrity were maintained. A small misalignment in weaving, for instance, might break the sensors. The team identified thermocouples and fibre-optic sensors that were fit for purpose and could be processed using three-dimensional (3D) weaving and tailored fibre placement (TFP) machines.

Using TFP, the team was able to insert thermocouples and strain-sensors into carbon-fibre preforms and fibre-optic cables into fabrics in the warp direction as they were being woven. The researchers were also able to splice connectors to these sensors so that the data they gathered could be interrogated.

The TFP machine was used to place a thermocouple 0.1 mm away from a location where a part would be drilled and, by using specialised data-acquisition equipment, the AMRC engineers were able to see that a temperature of 148°C (± 0.35°C) was generated during drilling, which was beyond the glass transition temperature of the matrix, 133°C. Evidence such as this would allow processes to be optimised to limit cutting temperatures that could be damaging to composites. The TFP system was also able to position fibre-optics within a preform in specific locations and shapes, which would be a requirement for the monitoring of more complex components.

The researchers were also able to gather data on the strain applied to a reinforcement during each stage of composite manufacture: resin infusion; thermoset curing; drilling; edge-trimming.

They claim that the project is the first step towards enabling the health of parts to be evaluated prior to their entry into service. In the future, a database of strain data for a given component could be obtained, and machine-learning algorithms could be used to determine if the strain generated during infusion, cure and machining would adversely affect the performance of a part. This database could be used for the bespoke design of products in the aerospace or automotive industries.

Part-scrap rates could be reduced by either controlling the manufacturing process more precisely or by showing that any defects in a part are within manufacturing tolerances. The sensors could also be used to monitor the parts in service, so it may be possible to use parts for longer periods, rather than replacing them after a set amount of time.

Further, the researchers say that the industry-wide use of intelligent workpieces with embedded sensors could enable an increase in productivity and could result in significant time and cost savings over a component’s life cycle.

The team has now started to explore how manufacturing data can be recorded so that it can then be used as a baseline for the fatigue-performance of a part.

Andritz reveals its plans for Techtextil

Partners to produce yarns and textiles from microbial cellulose fibres

27 May 2022
Please find below the list of forthcoming conferences and exhibitions on technical textiles and nonwovens.
Read more