The creator of a novel odour-capturing molecule and the developer of a process for impregnating textiles with dry powders have joined forces to create nonwoven dressings that have been proven to reduce malodours from chronic wounds. Editor James Bakewell caught-up with those involved to find-out more.

Around the world, significant numbers of people live with ailments such as diabetic foot ulcers, leg ulcers, varicose eczema, bed sores and post-operative wounds. Precise figures are difficult to come by, but according to the authors of a 2019 paper in Advances in Wound Care(1), approximately 2% of the total population of the USA is affected by these chronic wounds. For these people, the pain and discomfort caused by chronic wounds – and the time and effort that must be expended caring for them – are not the only burdens. Many also experience social embarrassment and isolation owing to the smells created by their chronic wounds.

Aqdot, of Cambridge, UK, thinks that it has found an effective solution to this problem. Spun-out from the University of Cambridge in 2013, Aqdot’s core technology is based on barrel-shaped molecules, called cucurbiturils, that attract and bind to organic compounds—in effect, capturing malodours. According to the company’s Chief Commercial Officer (CCO), Hugh Rathbone, Aqdot has developed a clean process that enables it to manufacture these cucur­biturils cost-effectively. By contrast, cucurbiturils produced using legacy technologies could cost “£1 million a kilogramme”, he says.

Aqdot initially began selling AqFresh in an air-freshener (called Oderase) for kitchens and bath­rooms, but – in response to interest from manu­facturers of nonwovens – was looking at ways in which it could incorporate the odour-capturing cucurbiturils into diapers, and feminine hygiene and adult incontinence products. As the company delved deeper into applications for Aqfresh in nonwovens, it identified an opportunity in woundcare.

While there are some routes to solving the problem of malodours created by chronic wounds, Aqdot says that they each have their issues. Charcoal is commonly incorporated into dressings to capture odours, but it only works in dry environments – chronic wounds are often moist – and its black colour is visually unappealing. It can be bleached, but this a less-than-ideal solution. Silver, meanwhile, is relatively ineffective and relies on an antimicrobial action to which the resistance of bacteria, which create malodours, is increasing.

According to Rathbone, AqFresh suffers from none of these drawbacks. In initial experiments, Aqdot sprayed the treatment onto nonwoven substrates as solutions in water and dipropylene glycol (DPG), but Rathbone says that the company’s researchers quickly realised that a dry-powder impregnation technology developed by Fibroline could be a highly promising approach.

Founded in 2003, Fibroline of Limonest, France, has developed a core technology and several variants (see Fibroline’s processes, below), all based on the use of electrical fields to drive dry powders into substrates. In its basic configuration (called D-Preg) a scattering unit deposits dry powder onto a porous substrate travelling below. The substrate and powder then pass between two electrode plates, which are connected to a low-current, high-voltage generator that produces an alternating electrical field in the intervening space.

The alternating field first electrically charges the dry particles in the powder and then attracts them, pulling them into the substrate. Fibroline says that no heat is required and there is no rise in temperature during processing, which takes place at room temperature. By adjusting various parameters within the set-up, such as the voltage across or the distance between the electrodes, Fibroline says its can precisely control the degree of penetration of the powder, as well as its distribution. The charged particles naturally repel one another, because they carry the same polarity, and this helps to distribute the powder uniformly. However, it is also possible to cause the particles to arrange themselves in a gradient through the thickness of the substrate; for instance, by increasing the density of the substrate through the thickness to reduce the penetration.

Using the basic configuration of Fibroline’s technology (called D-Preg), a scattering unit deposits dry powder onto a porous substrate travelling below. The powder is then driven into the substrate using electrical fields. The S-Preg variation of the process, shown here, allows users to deposit powder at a rate as low as 5 grammes per square metre in a pre-determined pattern and can be used in cleanrooms.

Owing to the absence of any need for solvents and the extremely low consumption of energy, the process is environmentally friendly; for instance, a 4-m-long unit with a width of 1.2 m and running at 10 m.min–1 typically uses less than 15 kW, while treating about 1 t.h–1 of substrate. Energy consumption is also kept low because the treated substrate does not need to be dried.

Fibroline’s business model is based on its extensive, worldwide ownership of patents for the process and the resulting products. Working with its customers, the company first aims to adapt its technology and demonstrate the added value of its approach for a given application, working alongside the partner throughout the development of any products, from laboratory to industrial scales.

In the case of the AqFresh powder, Fibroline’s team –  including R&D Project Manager, Léa Monin – used a binder to help bond the treatment, at loadings of 1–5%, to the substrate. The partners claim that the approach has a number of benefits. Fibroline’s Chief Executive Officer, Jérôme Ville (CEO), says that, in contrast to liquid-impregnation routes, the use of dry-powder impregnation ensures that the substrate remains porous and that the cucurbiturils are free to work as intended. 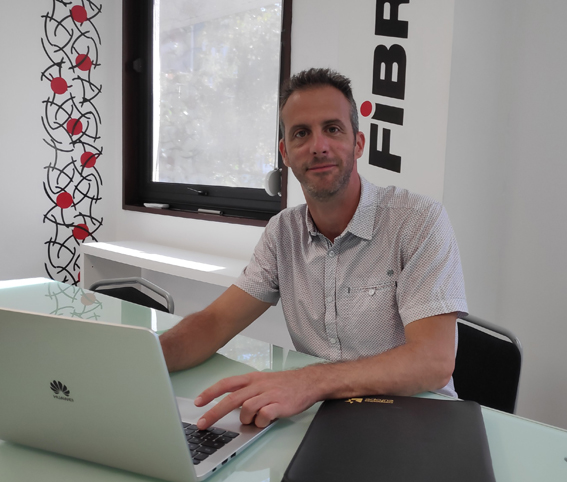 Rathbone adds that Aqdot’s researchers were concerned about the particle size of the powder, which ranges from a couple of microns to 250 microns, depending on the degree of agglomeration there is (90% of the particles in a given sample will be smaller than 30 µm). He continues: “Fibroline’s technology was able to work with that extremely effectively and that could be another very significant reason why we might use this technology over, for example, spraying.”

The cucurbiturils cannot be felt in the resulting bandage and Aqdot says that, in testing conducted by the company, nonwovens treated with AqFresh generated 78% less malodour than an untreated nonwoven when putrescene was added to them (see Evaluating odours, below). The partners are now looking to license the technology to manufacturers of nonwovens.

In the meantime, Rathbone says that Aqdot is looking at ways in which Aqfresh can be incorporated into automotive textiles, such as seat covers, headliners and carpets, to capture the volatile organic compounds (VOCs) that they typically emit when heated by solar radiation. For its part, Fibroline is developing a variant of its technology for incorporating powders into yarns and tapes.

Further to D-Preg, Fibroline has developed three variations of its process(2). T-Preg is a version of D-Preg tailored for high running speeds (50–500 m.min–1) and is particularly suitable for hygiene applications. S-Preg allows users to deposit powder at a rate as low as 5 g.m–2 in a pre-determined pattern and can be used in cleanrooms. Finally, Y-Preg can be used to impregnate rovings and yarns and is suitable, for instance, for use with coiled cartridge filters.

Aqdot runs its odour tests using trained assessors selected according to the ISO 8586 standard(3) (from the International Organization for Standardization (ISO) of Geneva, Switzerland) for their ability to discriminate and describe malodours. They undergo training and a monthly assessment using validated polymeric standards provided by a qualified supplier. The panel carries-out the odour tests to evaluate the impact of the treatment. The panellists evaluate the intensity of the odour based on a scale from 0 to 6 (not detectable to extremely strong odour) and the hedonic tone from -4 (extremely unpleasant) to +4 (extremely pleasant).

(2)Dry powder impregnation takes the heat out of processing, https://www.technical-textiles.net/node/74288